A downloadable game for Windows

Asking nicely if you could have full control of a newly discovered planet didn't work. Neither did sending your legions of space-lawyers to argue the case for your galactic megacorporation! So we're down to the old-fashioned way-- lots of fighting, and lots of lasers!

If anyone asks, you're just negotiating with your fellow CEOs.

Terra is a turn-based strategy game set on an alien world, where multiple corporate armies are fighting for control, so they can get back to their usual business of building office parks and digging out landfills for massive amounts of paperwork. Players give orders to each of their units, and turns are executed simultaneously.
Successful CEOs are able to think ahead, anticipate their opponent's moves, and deploy their troops effectively.

Play through 9 missions against the AI in the mission mode, and battle against local friends or the AI on one of 29 symmetrical versus maps. Or, design your own maps with the map editor!

# Installation
Download the 'Terra.zip' file and extract it. Run the 'launcher.exe' file to play!

You may need to download and install the Microsoft Visual C++ redistributable, if you don't already have it (many other games include it):
- https://www.microsoft.com/en-us/download/details.aspx?id=5555

# How to Play
Your goal is to be the last corporation standing! Eliminate the enemy HQ!
Turns in Terra are executed simultaneously. This means that each player will simultaneously give secret orders to each of their units, and then those orders will be played out at the same time. If two units occupy the same tile, they'll fight!

Once you've issued orders to all of your units, open the pause menu and 'submit' your turn to continue!

You'll need to expand your base, harvest resources, build new buildings, research upgrades, and raise an army to defeat your opponent. Units have strengths and weaknesses, so a balanced composition of units is recommended (unless you're very confident that your enemy is specializing in one type or another!)

Generally, you can press TAB / Middle Click on a unit, building, or upgrade to view more details about it.

There are multiple units and buildings:
* HQ: Your base! Can produce Colonists and research economic upgrades. If destroyed, you lose!
* Generators: Harvests resources from crystal tiles each turn.
* Barracks: Can produce combat units, and research upgrades for them.
* Tech Labs: Can research any type of upgrade, and is the only building that can research new types of units. Slightly heals allies.
* Towers: A defensive structure. Damages nearby enemies each turn, and has a weak melee attack.

* Colonists: Your basic economic worker unit. Can build buildings, and are the main way you can gather more resources.
* Troopers: A bread-and-butter ground combat unit. Strong against buildings and mobility units, but notably weak to ranged attacks.
* Rangers: A basic ranged unit, it can target a distant tile to attack without counterattack. Weak to high mobility units, their ranged attack can be contested and canceled by occupying their tile.
* Ghosts: A high-mobility glass cannon unit, who can move through enemy units to get at the back line.
Strong against Colonists and ranged units, but easily defeated by most ground forces.

* Guardians: A tier-2 ground combat unit. A strong defender, Guardians provide defense bonuses to allies. Notably vulnerable when they're caught on the move.
* Boltcasters: A tier-2 ranged unit, with an impressive attack range. Their attacks deal some damage to tiles around their target, as well. Notably low movement.
* Banshees: A tier-2 mobility unit, with extremely high movement range. They can pass through normally untraversable terrain, and through enemy lines. Notably low health. 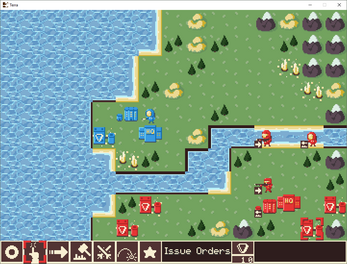 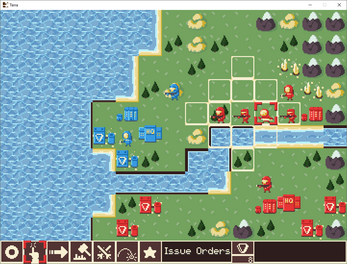 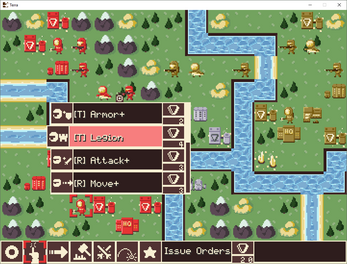 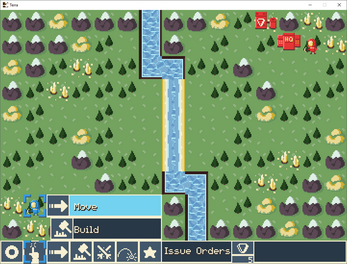 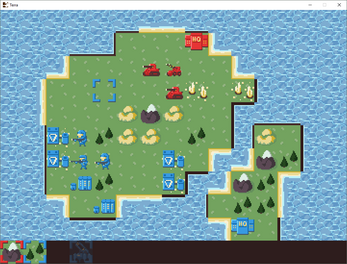